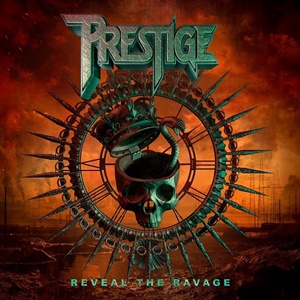 Resurrecting after a late 80’s/early 90’s initial run that included three albums, Prestige is a part of a burgeoning Finnish thrash movement that contained acts like Stone, Airdash, and National Napalm Syndicate. Three-fourths of the key members are back in business as latest drummer Matti Johansson (ex-Korpiklaani) entered the fold last year and we have a fourth album for Reveal the Ravage – their first in 29 years. Often wondering if older musicians will pick up much where they left off in terms of songwriting and style or venture into new territory – after initial spins its obvious these gentlemen prefer a chunky, heads down style of semi-progressive thrash that batters and bruises.

Chock full of tasty riffs, melodic moments, and a boatload of gang-infused chorus/background vocal support to drive the material careening through bodies globally, these ten songs showcase a fluid European meets American scope as the diversity and dynamics keep ears pinned especially for those who miss that older ‘together as one’ spirit to this movement. Apparent early is the potent bark and crossover delivery from bassist Aku Kytölä – his sharp ferocity during “Pick Your Poison” and opener “Innocent” harken memories of John Connelly (Nuclear Assault) in his prime. Specific calmer, restrained guitar passages for the opening sequence of “Exit” or the moodier closing cut “Prime Time” add depth to the normal aggressive rhythms and supplementary squeals, accents, and harmony/lead break abilities pouring from the hands of Jan Yrlund and Ari Karppinen. In terms of output, Prestige straddles the lines of Bay Area thrash with European power sensibilities – you can tell they love artists like Metal Church, Heathen, and Metallica, and yet add a bit of Rage or Artillery-like charge to the mix. The shout-a-long ‘hey’ aspect as well as occasional bass spotlight work during “You Weep” makes this track a second half standout, while the tight picking and wah-wah soloing for “Blessed Be” should go down a storm for most thrash mavens.

Add in the expertise of Jan from the cover front (founder of Darkwave Design) and Prestige continues to execute a solid brand of thrash as if no time has elapsed – gaining insight for their strengths, using modern production tools to the best advantage possible. In the end, welcome back and hopefully this is the start of an upward climb for this veteran act.