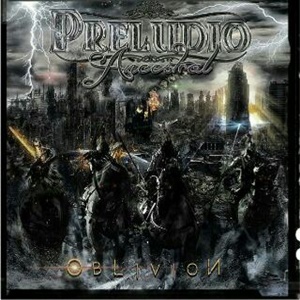 Hailing from Argentina, Preludio Ancestral have roots that go back to 2005 – although the only member still associated with those early days is guitarist Leonardo Gatti. Releasing a demo, two EP’s, and three full-lengths in Spanish, Oblivion represents a fresh lineup as well as their first English-sung effort – signing with Fighter Records in the hopes of bringing their brand of symphonic-oriented power/heavy metal to a wider international audience.

When looking at the credits you might be taken aback at the numerous vocalists that appear throughout the ten tracks – outside of main singer Alessio Perardi, there are seven other singers that grace the album, ensuring a diverse approach if not anything else. Overall you get everything from solid mid-range deliveries for “Dust World” to Timo Kotipelto-like high octane action on the similarly Stratovarius-like power charge that is “King of Silence”, very convincing as well. Leonardo and keyboardist Gabliels Crisafulli ably thrust and volley between uplifting main riff/power chord duties and their shredding/classical break flashes, a prominent component to ideal appeal within this sub-genre. “Fear of Falling” has that head-scratching transition that takes an otherwise Iron Savior-oriented cut and places an 80’s semi-rap meets “Dirty Laundry”/Don Henley-ish refrain out of nowhere – a game changer that may make some smile while others run for exits. And of course, a power metal record wouldn’t be complete without an anthem to the genre we know and love – cue “Ready to Rock” for that check mark.

What puzzles this scribe the most is the direction Preludio Ancestral want to go in from track to track. The keyboard play can be powerful one minute, then very techno or dance-oriented the next. The computer/technology effects can be overused and abused – check out closer “Metal Walls” for ways to drown out the vocals and kill momentum despite the swirling groove and keyboard layers. Add in production values that lack a biting guitar tone and make everything appear distant in a cave and it makes Oblivion a tougher go to record when needing to satiate your symphonic power metal thirst. Hopefully they’ll be able to reign in those ideas next time, as they have the proper Stratovarius/Labyrinth meets heavy metal talent on their side.