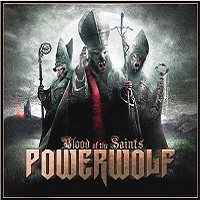 If we didn’t know better, then we would think Powerwolf were some recently re-activated NWOBHM band, back for another shot of glory. Seriously, doesn’t “Powerwolf” slide in nicely next to Angel Witch, Tygers of Pang Tan, Hell, and Diamond Head? To these ears it does, so it’s no surprise that Blood of the Saints (the band’s fourth album) sounds like a beefed-up take on classic metal, only with a power metal angle that pushes the thing along nicely.

One has to think a song like “Sanctified With Dynamite” isn’t intentionally funny, with singer Attila Dorn shouting “Die! Die! Dynamite!” in a noticeably vampiric tone. Dorn sounds like Dracula…or Count Chocula, for that matter (great cereal, by the way). Nevertheless, “Sanctified” is a rip-roaring good time, sure to elicit the necessary swath of crowd participation. Yet Dorn’s vocals are the one thing that could divide the album in two, for his European bravado is either spot-on (“Murder At Midnight,” “Dead Boys Don’t Cry”) or a bit on the annoying side (“We Drink Your Blood,” “Night of the Werewolves”).

In spite of Dorn’s hit-or-miss vocals, Powerwolf’s pristine power metal blend instantly recalls modern day Helloween, minus the occasional flirtation with speed that Weikie and the boys are prone to. Still, that doesn’t take away from the hard-charging momentum during “Phantom of the Funeral” where a sing-a-along chorus makes the song a glorious romp and perhaps the most enjoyable song of the lot.

Some may find Dorn a bit too campy, even for the ever-hokey power metal field. Yet the bulk of the songs on Blood of the Saints are damn near-infectious, often roping one in with a quick vocal jab. On the surface, this is borderline stupid and silly stuff, but that notion is tossed to the back after repeated listens of the involuntary nature.