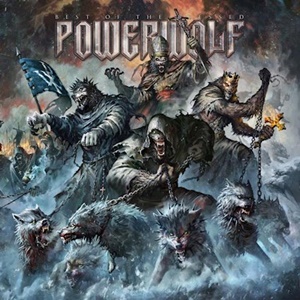 Celebrating 15 years together as a group, German power metal veterans Powerwolf are one of the most successful bands in their genre across Europe and other parts of the globe. Reaching the top of music charts domestically and abroad plus ascending the ranks of touring and festival bills, it’s time for a sprawling, comprehensive look at their discography. But of course the group isn’t content to release just a standard best of effort – as you’ll be able to get multiple versions of this outing that beyond the 16 track basic edition into an earbook or LP edition that includes 14 to 18 additional live tracks depending on which version suits your needs.

Seven of the sixteen tracks receive a 2019-2020 ‘update’ (an easy way to get around their early Metal Blade catalog now being a part of the Napalm family for years), beneficial in terms of the production values, tones, and technology at the band’s disposal from those early records to the current sound of the group. The sing-a-long choruses, the operatic voice of Attila Dorn, the church-like organ strains from Falk Maria Schlegel and the churning guitars of Matthew and Charles Greywolf plus the solid drumming mechanics of Roel van Helden ensure that the selection of songs keep the blood pumping and the anthems flowing. Favorites change daily – sometimes this scribe is in the mood for the morose, mid-tempo commercial strains of “Demons Are a Girl’s Best Friend” or the militant rhythm assault and double kick fueled “Amen & Attack”, or other times the early favorites like “Kiss of the Cobra King” and “Saturday Satan” deliver the thrills necessary to get through a hard day. The media book and earbook versions contain the live bonus material – including many other songs from the last studio album The Sacrament of Sin like “Fire & Forgive” plus “Stossgebet”. It all depends on what you feel is enough to quench that Powerwolf fill musically – but it definitely appears that the band are enjoying their headliner status and keeping the quality of these releases on pinnacle measures.

Already hard at work at the eighth Powerwolf studio record, those not in the know would be wise to pick this up to familiarize themselves with why they’ve been able to catch the hearts and minds of power/classic metal fans everywhere.