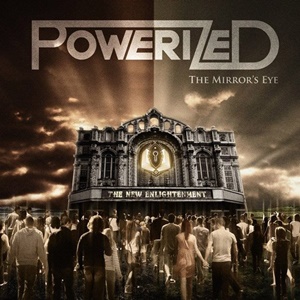 What may seem like a relatively unknown power/progressive metal band with symphonic overtones to some, Dutch quintet Powerized have a leg up in the game thanks to vocalist Nick Holleman and his four-year run with veteran US power metal act Vicious Rumors. He impressed legions of metal followers worldwide on stage and record – proving he has the pipes and abilities to command audience attention through his professionalism, even at the tender age of 26. Ready to return to Powerized, their debut full-length The Mirror’s Eye aims to bring an energetic, versatile brand of Euro-style metal back that adds the air of bombast, while still being melodic, harmony-driven, and theatrical through its wide array of material.

The main sound of Powerized revolves around the layers of keyboards that can be very dramatic in a Kamelot-esque mystique against a twin guitar lineup that unfurls a mixture of power/progressive style riffs that gravitate towards Helloween/Edguy-ish runs one moment, but then slightly intricate or cultural the next (think Pagan’s Mind or Symphony X). Nick’s register goes all over the landscape – easily ascending to falsetto highs a la Michael Kiske or Tobias Sammet on parts of “Satan’s Bat” or evoking the heavens in the choir-fueled passages for the closing 11:37 epic “Behind the Gates”. Over the course of the record you’ll get dynamic twists that include the emotional, piano-led ballad “Forever Roaming”, supplemental children’s choir support when called for, and this grandiose appeal that you feel like the eight songs are taking you on a transformative journey through the picturesque lyrics and equally intoxicating power/symphonic music. The band’s promo photos with the eye make up even give off a bit of old throwback Crimson Glory imagery – proving that Powerized want to be taken seriously on a multi-sensory level.

Considering the more streamlined ‘hard rock’ direction Edguy moved towards since 2006, The Mirror’s Eye could be that niche record to gain those people who miss the Theater of Salvation/Mandrake days of the band, placing Powerized in decent shape as they develop more material down the line.