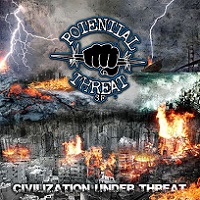 During the tail-end of the first thrash movement, tiers of acts didn’t really push creativity forward so much as recycle their favorite riffs and chords, cutting and pasting them in the hopes that audience would accept this material as their own. As such, I remember receiving demo material in my tape trading days from Potential Threat SF during 1988-1990, and soon fading into the background. The Thrash of the Titans cancer benefit for Chuck Billy in August 2001 lit a spark under the four-piece though, and they’ve been releasing demos, EP’s, and full lengths ever since.

Civilization Under Threat is their second full length, a 10-track effort clocking in at just a shade under the hour mark. Half of the songs eclipse the 6:30 timeframe, and in my view, you better have some interesting riff flow or harmonic dynamics going on or this will plod along endlessly. And based on repeat exposures with “Stick to Your Guns” and “Written in Blood,” let’s just say there’s more Souza-era Exodus, poor man’s Machine Head, and left over Defiance outtakes than anything remotely Heathen or Death Angel-like to justify the drawn out arrangements.

As guitarists Mike Noble and Daniel Sheridan deliver all the requisite point/ counterpoint rhythms and engaging, melodic lead play that moves beyond carrying their shred cards, the problem is the vocals are average with too many pedestrian gang-led choruses, and the drumming from Kenny Noble fails to elevate any excitement either. Check out the vocal patterns matching the riffs for “Rise of the Apocalypse” and the seemingly forced timing counts within “The Threat of Things to Come” and it won’t be a mystery to understand why Potential Threat SF remain in the thrash shadows. 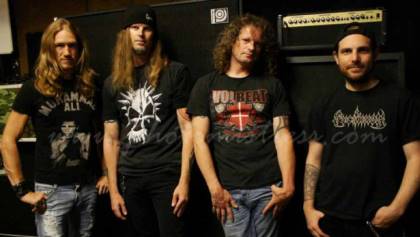