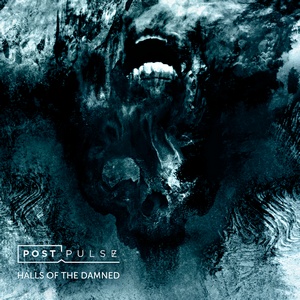 So much classification nowadays in death metal. It’s brutal, it’s melodic, it’s technical, it’s progressive. Post Pulse is a new death metal band from Finland that matters not about these things. Listening to their debut, Halls of the Damned, it’s clear that songwriting is what’s most important, instead of trying to appeal to the widest influence net.

What pops up most frequently on Post Pulse’s radar seems to be that of groove. Each track seems to center around the concept, which makes for some catchy riffs – in this regard a mixing together of Finnish and American death metal scenes. The approach is deceptively straight-forward. Groove-intensive, heavy yet memorable riffs that occasionally push down rapidly on the tempo. There are some intricacies in the groovy riffs that only reveal themselves after a few listens. Lurching riffs within “When I Dream” are rhythmic and tend to lure you into a hypnotic ease, but then the music accelerates and ratchets up the heaviness. “Let it Burn” also utilizes a similar feel, with instantly catchy grooves that build into a more massive chorus. At the other end, the dreary darkness of riffing in “Loosing Myself” feels like pure, unadulterated death metal and it couples nicely with the emphasis on grooves. The one sticking point is that as you continue to move through the album, some of the tracks start to feel too similar and it loses some of its energy.

Halls of the Damned blends melody and aggression in a way that is thoroughly death metal approved. While some of it may blur towards the end, it’s a great starting point and it’s nice to see a band that’s focused more on ‘the song’ than trying to shoehorn themselves into a particular scene and setting. One to keep watch on for in the future.