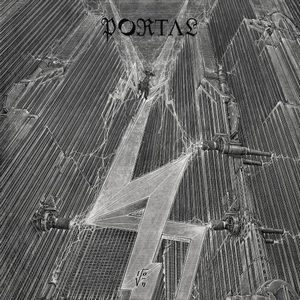 If there’s one metal band that seems to define unsettling over the recent years, it’s Portal. Their off-the-beaten-path approach to death metal is usually known for it’s Lovecraftian eeriness, perhaps more so than in terms of riff-work itself. It’s been five years since Vexovoid, and the band are finally set to deliver another round of terrifying, claustrophobic, and otherworldly material. Or are they?

Of the Portal discography, Ion seems much less filthy from a production standpoint. While they are still sonically in the same ballpark as what they’ve done – frenzied and swirling death metal, it feels a bit more accessible than their previous albums. Alongside this feeling (or perhaps due to it), the music reveals a more technical structuring to it than before. While dissonant and chaotic, discernible moments prevail in cuts like “ESP ION AGE” do give an appreciation for the technical ability behind the swirling mass of terror and distress. The songs are very succinct as well, rarely pushing past the 4-minute mark, even if they are quite dense in their formatting. While some may find that discouraging, there’s still moments like “Spores,” where distortion still reigns supreme, giving the track an entirely hellish feel that is anything but approachable. A song like “Crones” still manages to crawl under your skin – building up a sense of dread and fear to the breaking point before unloading sheer terror and pandemonium.

If anything, Ion proves that lifting the veil on the muddy production qualities reveals that Portal are just as hideous and terrifying without the cavernous focus, even if the view is a bit more twisted into a different direction. While it may be a polarizing release for some of the most devoted, Portal are still masters of chaos and subterranean atmosphere, and perhaps they can grab a few new followers due to their frenzied technical chops which are now in plain view.