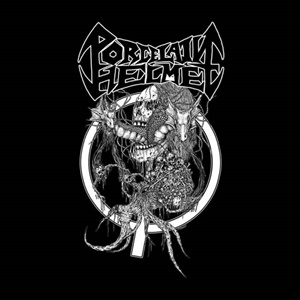 Another Hudson Valley, New York entry, Porcelain Helmet are a quartet aiming to put their own stake in the crossover thrash platform through this self-titled debut album. Originally forming in the summer of 2015 at a Paul Green Rock Academy, ironically hosted by Scott Ian (Anthrax) and Brandon Small (Galaktikon), these teens went through a couple of lineup shuffles and songwriting refinements to develop these nine cuts. For their first foray in the studio, they showcase a lean, mean sound that keeps things tight and heavy when called for, while injecting the right energy and hook/melodic runs necessary to keep audiences of the genre engaged and coming back for more.

The in your face production values immediately hit the ears in a comforting manner – nothing feels heavily digitized or overly compressed, the snare snap very crisp as well as making sure that you can feel that low end bass, even through the fluid instrumental breaks or faster, heads down riffing. After a weird male semi-melodic vocal opening, the speed harmonic runs and furious upper pace drumming takes command for the title track – shifting between a mid-tempo Anthrax-like groove (with proper bass support from Elliot Mangione) while the dual Jack Weiss/Will Lange guitar play give off a Testament / “Over the Wall”-like charge. The crossover punk/hardcore edges come across in certain transitions or gang-like choruses for “Purple Crayon” as well as the brief 74 second ode to everyone’s fears when going to the beach “Shark Song”.

A sense of throwback maturity takes shape during “NSTS”, the main musical hooks and stunted tempo plus open interaction during the lead break making this scribe believe Porcelain Helmet possess an equal love for Iron Maiden and their offspring just as much as they love their East Coast/West Coast thrash bands. Drummer Macky Bowman gets a prolonged, almost three-minute showcase for his abilities on “F.A.C.E.” – while Elliot’s sneering, speedy vocal delivery embodies that raw, in your face spirit that put this genre on the map 35 plus years previous throughout the record (personal affinities lean to “Slaughterhouse” and the jackhammer-oriented “Trapped Under Utah”).

Clocking in at just under half an hour, it should be very interesting to see where Porcelain Helmet goes from here – as they’ve developed a decent debut, and should blossom as they get even more seasoning under their belts.