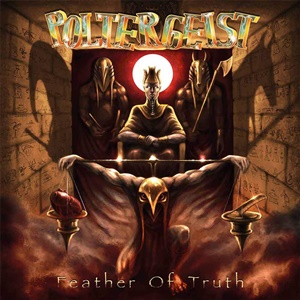 Back in the 1980’s, another Swiss thrash troop making a minor mark on the scene would be Poltergeist. Their first two albums Depression and Behind My Mask came out during the early days of Century Media – developing a semi-technical sound featuring a boatload of quick hitting riffs, razor sharp transitions, and plenty of energy abound. Breaking up around 1994, they would reform in 2013 and release their comeback effort Back to Haunt in 2016, leading us to their fifth full-length for Feather of Truth. Only vocalist André Grieder and guitarist V.O. Pulver remain from their early days – but they’ve filled out the second guitar, bass, and drummer slots with more than capable musicians to keep the thrash train a rollin’ through these ten main songs (plus two bonus songs on the digipack CD version).

Always straddling a mix of European and American influences, it’s evident when the band wants to go into mid-tempo groove mold for “Saturday Night’s Alright For Rockin’” during the mid-section instrumental transition that they lay down some serious Exodus-like rhythms and potent mosh-like stomp – wrapping around some otherwise blitzkrieg Metallica crunch and fury. Militant drum measures from Reto Crola push the title track into progressive Paradox meets Forbidden avenues, the guitar riffs swaying like a mid-tempo see saw as thoughtful lead parts spring in and out at different times to keep your ears and brain engaged. The quintet easily excels at varied paces – gritty in low end mechanics during “Phantom Army” while injecting some triplet gallops and mid-register background ‘woah’ proclivities during the Destruction-oriented “Megalomaniac”. Even as the second half of the record rolls along, you get the feeling that Poltergeist understand how to balance out speed and intensity with progressive and semi-technical affairs – “Thin Blue Line” a latter track that contains a lot of nifty riff changes, tempo variance, and sinister vocal melodies from the always reliable Grieder. It’s always helpful to have an ace in the deck – beyond multiple songwriters, that would be the veteran production skills of V.O. Pulver through his own Little Creek studio, maximizing the bite through a clear yet heavy recording.

Thrash continues to be a mainstay thanks to the creative energy and thoughtful output of bands like Poltergeist through releases like Feather of Truth. Crank this to ten, prepare to demolish anything that dare stand in its path, and hopefully when the smoke clears, you’ll be airing this incessantly.