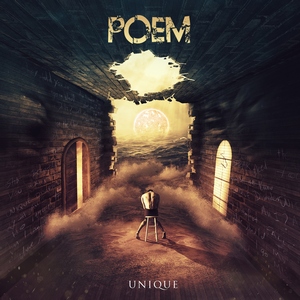 Following up 2016’s Skein Syndrome, the band’s second album, Poem have made a much quicker return to the fold for their third release (as their debut came out in 2009). The Greek progressive/alternative metal act had a good thing going for them, operating in a space that could provide equal appeal to fans of acts like Katatonia as well as Tool or Soen. Unique sees them continuing to stay in this particular niche, and generating more atmosphere within.

Poem are able to generate feeling through the use of minimal outside sources. The classic example of a ‘band’ seems to describe it well – there’s no extra trimmings. Just a focus on songwriting that leads to riffs that can maintain a vibe that seems to bounce back and forth between progressive metal and hard rock while wrapping up some serene atmospheric moments. The strongest emotive pull of the band is still that of vocalist Giorgos Prokopiou, who has a soaring quality to his singing and is often coated in emotion. Be it a mellow moment or a thunderous, rhythmic groove – he can match said intensity and bring the music up a notch. Probably the best example of this is “Euthanasia,” where the music leans from acoustic moments to some of the most primal on the album, and Prokopiou swings from gentle croons to hoarse shouts. Some may view the heavier output as staying very close to the Tool/Soen line, but the genuine emotion behind all the instrumentation is done at such a level that none should complain.

Within the bunch, it feels that one or two tracks could have been trimmed down a bit, given the sense of structure, but it’s an admittedly small gripe. The band’s groove-friendly nature, coupled with some phenomenal vocals, should be just the ticket for those in search of some more modern sounding progressive music.