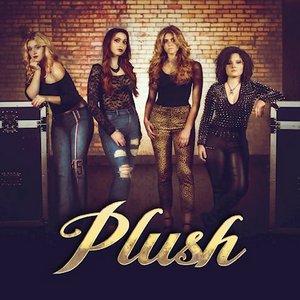 Truth be told, much of the modern rock of today seems to tap from the same common vein.  It feels generic and overdone, working off of a safe and comfortable palate that’s there to ensure ‘big successes.’  With the release of their first single, “Hate,” at the early part of this year Plush caught the ears of this scribe in their ability to take that core rock sound of today and mesh it with some of yesterday’s mentalities (notably from ‘80s rock and ‘90s grunge) and spin it into something that’s both passionate, fresh, and a treat to listen to.

Given the band’s ‘youngster’ status (all of them are under 21 at time of writing), it’s quite clear that the four of them have taken their study into the genre over the decades and have cherrypicked what works for them, while still giving it the harder energy of today’s scene.  The result is something that feels like it gives some nods to the past, while looking ahead with a vibrant and youthful energy.  At the forefront of this is vocalist Moriah Formica (who appeared in The Voice at the age of sixteen), who provides a charismatic performance behind the mic.  Cuts like “Why Do I Even Try” or “Will Not Win” provide an intimacy while allowing her to be a real belter that grabs the attention.  Even on the more relaxed cuts of “Don’t Say that You Love Me” or “Sober,” she brings in a certain degree of urgency to them with a combination of rock energy and genuine passion.  But the latter track also brings in the importance of the rest of the act, particularly lead guitarist Bella Perron, with the instrumentation not playing a second fiddle role to the vocals, in this case driving the urgency of that track’s second half.  Current single “Athena” revels in heavy grooves and almost grungy dirges and explosive rhythm segments that have ‘90s all of them, yet brought up to the modern era.  Tiptoeing that line is impressive for such a young act, and how they swing the dynamics between, such as the more modern and hooky “Walk Away” and more throwback sounding “Champion” makes for an album of anthems that won’t leave your head anytime soon.

Plush manages to do something that few modern rock acts have been able to succeed in – providing an exciting sound to ground themselves in that dabbles in several eras of influence without being a direct copy of any of it.  Instead, Plush sounds like a timeless rock debut that displays the band as worthy of all of the attention being directed their way at the moment, and plants the seed for a very fruitful future.