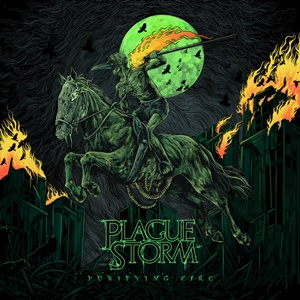 It’s no secret that many writers of this site have a strong affinity for melodic death metal. Coming from the start of the scene in the 1990’s with the work of At the Gates, In Flames, Dark Tranquillity and others, goosebumps form and hair stands on edge to the delight of the mix of savage riffs, energy, circular guitar melodies, and the possibilities contained branching out even three decades later. Plaguestorm is a one-man project from Sebastián Pastor, fleshed out with vocal support from Mikael Sehlin and a couple of guest guitarists for solos on this second album Purifying Fire. Those who love the early Swedish movement will delight at the uplifting guitar charge, raspy screams and growls, plus overall atmosphere that pays homage to those early years, while injecting his own take and creativity in spots.

Tackling concerns of humanity’s evolution and negative interference with nature for personal, profitable gain while intentionally starting fires and cutting down the planet’s resources, the music Sebastián writes weaves that magical tapestry that put releases like The Jester Race and The Gallery into the heads and hearts of impressionable musicians. Listeners will be swept into a hypnotic sway to the mid-tempo riffs and swirling guitar harmonies throughout the six-minute plus title track, while the follow-up “Never Learn” has a layered texture to its semi-progressive drum measures, Mikael mixing up his brutal verses with some strong, passionate clean chorus work that resonates well for its dynamic contrasts. Texture and feel matter in the Plaguestorm foundation – mapping out the best musical hook, heightening anticipation through proper transitions to flesh out the best balance between catchiness, headbanging, and brutality. Favorites rotate in and out depending on the day – the speedy heads down “Close to Nowhere” as well as the nine-minute plus epic “Burning Paradise” with its beautiful acoustic additions before the In Flames-like twin electric harmonies kick into motion always sitting as highlights to these ears. The record ends on an orchestrated version of the title track – keeping the essential heaviness while adding bombast and tension in key sequences.

Plaguestorm has plenty to offer the ardent Scandinavian melodic death metal follower, even if they hail from Argentina. Purifying Fire conjures up all the excitement of those beginning years for the movement and could be that hidden gem that you’ve always been wanting to treasure.