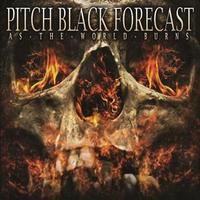 Mushroomhead, not quite a band with the most sterling of reputations amongst true-blue metallers (i.e. anyone who didn’t jump on the nu metal boat), have managed to survive well into their second decade. In spite of their revolving door membership, the band’s identity, and – at least to their fanbase – quality has remained intact, thus giving its collective some wiggle room for side projects, which Pitch Black Forecast is. Fronted by Mushroomhead vocalist Jason Popson (aka J Mann), Pitch Black Forecast has an unbeatable ace in the hole by way of drum lord Gene Hoglan’s involvement. Hoglan doesn’t make the band’s As the World Burns debut what it is, but comes darn close.

Foregoing any and all experimental elements generally associated with his main act, Popson has opted for a more straight-ahead approach, not too far off from Strapping Young Lad’s more focused moments, or better yet, SYL offshoot Zimmer’s Hole. With Hoglan behind the kit, there’s a bounty of extreme drumming, further demonstrating The Atomic Clock’s age-defying ability, as found on cuts such as “Season in Hell,” the groove-laden “So Low” (featuring a guest spot from Lamb of God’s Randy Blythe), and “Wrapped in Plastic,” where upon Ringworm shouter Human Furnace lends his knifing vocals.

For the most part, As the World Burns is a heads-down, no-frills, thrashed-out and thrashed-up affair. Where it lacks in variation, it more than compensates for in blunt heaviness, something that will no doubt suit a part of Mushroomhead’s fanbase who probably aren’t familiar with such sounds. Lest we forget additional guest spots from Devin Townsend on “Open Letter to God,” and perhaps most controversially, Avenged Sevenfold aviator sunglasses-lover M. Shadows, who pops up on “Landmine.” The fact the latter did nothing to calm or detour As the World Burns’ seething heaviness suggests just how brutal this thing really is.