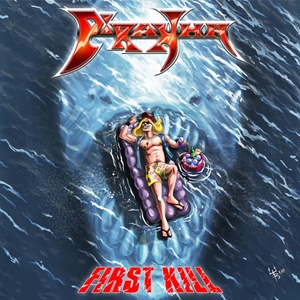 No less than seven bands have appeared according to Metal Archives under this moniker – but it’s probably rare to have two bands from Switzerland use the same name. This Piranha hail from Staufen, Aargau and have been together since 2013 – releasing a four-song demo in 2015 prior to this full-length debut album. The five-piece certainly embrace a lot of the 80’s aggression of the thrash movement, adding in a bit of power/traditional finesse along with some razor blade vocals to keep the adrenaline pumping throughout this record.

Precise tightness during the transitions often reveal loads of melodic, tasty moments – in an early Metallica galloping manner for the guitars and drums especially on early album highlight “Turning Point” where axe masters George Hauser and Oz ‘Atom Smasher’ lay down some sick rhythms and bluesy/ wah-wah enhanced speed shred during their lead parts. The NWOBHM injections occur in some of the slower parts where Iron Maiden-ish guitar lines sprint in and out before the thrash barrage continues – check out “For Your Own Security” and the driving “Slaves of the New Ager” for the band’s knack of keeping things headbanging and catchy for versatility’s sake. The material fluctuates between focused four-minute efforts and the occasional six-minute epic where the musicians get a chance to flex their chops and interplay chemistry – “Flight or Fight” featuring nifty harmony mechanics, shifting tempos in a progressive thrash manner, and another speedy, crazed delivery from vocalist Andre Ellenberger. He has a bit of that Schmier meets Evil Invaders voice that could cause love it or leave it reactions – but most in the thrash community will eat it up.

Thankfully not an Exodus clone as would be suggested by their moniker, Piranha has great understanding of mixing up their material in various shades of mid-tempo to faster arrangements without merely copying the same atmosphere or feel track to track. First Kill hopefully won’t be the last kill in the Piranha arsenal, as things look very promising for this Swiss unit.