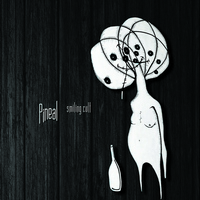 Named for its pine cone shape, the pineal gland serves to secrete melatonin, a hormone that regulates your sleep cycle. Before we discovered its true meaning, it was thought to be the “third eye,” the seat of the soul, and was important in terms of mysticism and superstition. Didn’t think you’d get a brief science and history lesson to start this one off did you? So Pineal the band then…Smiling Cult is their first release, and it’s one that you are going to want to stay awake for.

While the term “post metal” doesn’t provide quite the descriptor that it used to, Pineal do veer a bit in their own direction anyways. The “post” factor fits due to the heavy, colossal guitar riffs that one tends to think of with the genre are certainly here. But what you might not expect are the use of stoner, progressive, and grunge influences, and how well they mesh into Pineal’s sound. The vocals will be the dealmaker/dealbreaker here for most, with a distinctly Layne Staley-ish vibe that only occasionally goes into the shouted tones. Pineal owes as much to Tool and Alice in Chains as it does to Isis and Cult of Luna. Tracks like “Tides” and “Civil Disobedience” also have a pleasantly dark and haunting vibe that does a good job of balancing the heavy with the emotive. Plus, the heavy riffs translate into some great hooks, particularly on “Somatic” and “AOL.”

The brief 25-minute runtime of Smiling Cult sets the band up for some great upcoming things. It’s not often that bands can land a sound that is distinctly theirs on the first shot, and let alone it being a good sound. Pineal has grabbed the best of both worlds; let’s see what they can do with a full-length! Smiling Cult is worth seeking out if you want some outside-the-box metal.