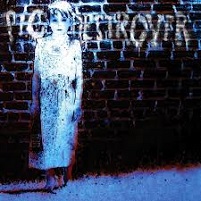 Widely considered to be one of the more forward-thinking bands in the grind/power-violence scene, Pig Destroyer lives up to their billing once again on their fourth album, Book Burner. The wait for this was long and arduous, moreso given the massive acclaim hurled at 2007’s Phantom Limb, but the time off gave Scott Hull and JR Hayes and crew some time to reorganize (new drummer Adam Jarvis of Misery Index kills it) and get their creative ducks in a row, resulting in an album that is both suitably violent and destructive.

Unlike Phantom Limb, Book Burner has Pig Destroyer back doing short songs again, which on some level, is mildly disappointing. We say that becausePhantom Limb was the first time PD ever ventured outside of the in-and-out song template that has come to define their career, enabling them to take lateral moves fitting of their angular grind-on-death metal sound. Still, that doesn’t take away from the bristling “The American’s Head” or “Eve,” which features some excellent guest vocals from Agoraphobic Nosebleed’s Katherine Katz.

The onus and fuss around Pig Destroyer has generally been on singer Hayes and his penchant for warped and disturbing lyrics, but the stabilizing force here is Hull, who pulls from his seemingly bottomless riff bag of tricks at will. Across the album’s 19 songs, Hull’s riffs are technical (“All Seeing Eye”), crushingly heavy (“The Diplomat” and “The Valley of the Geysers”) and sideways (“Baltimore Strangler”). Extra kudos to Jarvis, who applies his exceedingly fast blast-beat style to some of PD’s fastest and most extreme songs to date.

Sure to keep Pig Destroyer’s name untarnished and mighty in the extreme metal regions, Book Burner is at times, a startlingly brutal album, ready and willing to jostle with virtually anyone. And if we want to over-arch this thing, Pig Destroyer might only be second to Napalm Death when it comes to grind bands worth giving a damn about.