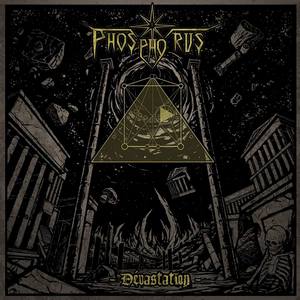 Crawling out from the blackened thrash waters, Quebec’s Phosphorus have accumulated a few small releases and a 2014 full-length (Assassinat) over their approximately 10 years in existence. Dévastation is their latest EP, and gives a good impression of what to expect with the band even if it does fall on the shorter side of the spectrum.

Consisting of three songs (“Devastation” Parts I, II, and III) and an “Intro/Outro,” Dévastation is more of a skin and bones release than a meatier offering (the entire release is less than 14-minutes total). The “Intro” doesn’t really go anywhere but thankfully only lasts about 30 seconds and allows us to get right to the point. The three showcased tracks feature razor sharp blackened riffs clashing with a thrashier tendency that does justice to both. The feel leans towards the old school, with a production that favors a buzzy, blackened assault and avoids any modern comparisons. The older feel is genuine though, punctuated by some blasts and frantic riffs – essentially juxtaposing ‘80s thrash with some early ‘90s black metal (with a hint of death metal thrown in for good measure). The riffs stand up, but don’t really stand out – good for when you are in the moment, but nothing seems to stick in the long term, which is a problem when there’s only a few tracks.

Plenty of energy behind what Phosphorus are doing, but the problem is that it’s nothing new. Blackened thrash die-hards are sure to get a thrill, but the short run-time and genre confines will probably keep Phosphorus relegated more to cult status until their next potential full-length.