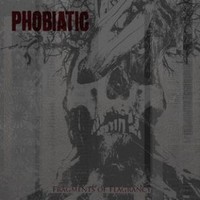 Holy technical death metal Batman! This album was quite an unexpected kick in the groin. Fitting in well with some of the strongest that Unique Leader has offered up here in 2014, Fragments of Flagrancy takes the modern technical sounds of bands like Origin and The Kennedy Veil and gives it some Suffocation muscle in both some of the NYDM-styled grooves and vocals. All this, from a German based act on their sophomore effort.

What Phobiatic really nail on Fragments of Flagrancy is the contrast of technical and groove. Plus they keep the track lengths to down around 3-4 minutes for the most part and this helps keep them focused. You’ve got short blasters like “Abnormal Dilation” and “Like Pigs in the Dirt” coupled with still faster paced but groove-laden numbers like “Downward Spiral” (which lovingly reeks of NYDM groove) and “R.A.T.T.” to keep the whole thing from becoming a one-note affair. There’s even a bit of atmosphere with “Suitable Method” and “Metropolis (of the Dead)” to further push some replayability. The vocals are very Frank Mullen, and certainly get the necessary job done, though maybe a few more highs from time to time might enhance things a bit. Despite the nod to the elders, the production does put it up towards the newer end of the spectrum (which may turn some off) but it’s the type of production that an album like this needs in order to make sure you can hear the fury of notes being administered.

It’s always nice to get a surprise dose of brutality and Phobiatic is bound to get some well-deserved attention for Fragments of Flagrancy. While it maintains the technical death metal ethos, it’s great to see the band stepping outside the parameters a bit and change things up. Fans of elder statesmen like Origin, Suffocation, or even newcomers like Alterbeast and The Kennedy Veil should seek this one out.