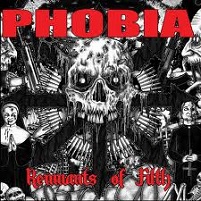 Seemingly incapable of being laid to rest no matter how many members they go through, California grind masters Phobia have managed to survive another round of band turnover prior to the recording of their fifth album, Remnants of Filth. A big hats off to founding member Shane McLachlan, whose single-minded focus on all things related to the scene has helped keep Phobia alive when lesser bands would have wussed out. As a result, Remnants of Filth will tear your cranium off.

Following the grind playbook to a T, Remnants of Filth manages to cram in 18 songs at around 19 minutes. While not a record for running time, it makes one wonder why it takes Phobia so long to put out albums. Like, is there that much to ponder when you’re putting together an album of this nature? Probably not. In any event, there’s a lot to get hopped-up (or stoned, for you grind stoners) about, including the zippy “Resolution,” which has a brisk gang-shout chorus. “Plagued By the System” looks right down the barrel of Scum and doesn’t flinch, while traditional Phobia numbers such as “Infraction of Pride,” “Let It Go,” and the crust-punk inspired “Filthy Fucking Punks” all rage with a manic intensity that belies the band’s 20-plus years in the scene.

The beauty of Phobia and Remnants of Filth lies in its predictable, yet jarring nature. You can practically look down the tracklisting and know that some kind of storm is going to be whipped up while some socio-political knowledge was going to be dropped. For that, Phobia will always be en vogue, the grind way. 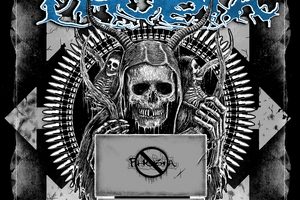 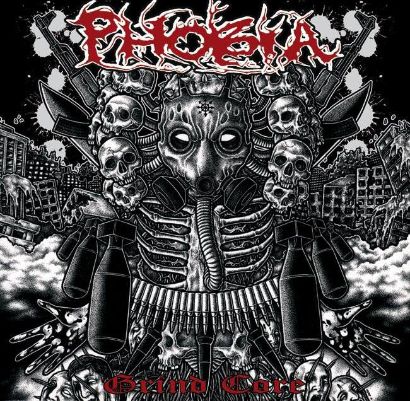