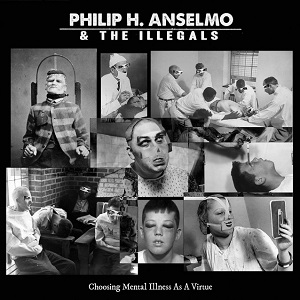 With nowhere near the expectations of his first “solo” outing, 2013’s craggy Walk Through Exits Only, Philip H. Anselmo, best known as Pantera’s indomitable frontman and Down’s out-front-guy, has circled the wagons for his second foray, Choosing Mental Illness as a Virtue. Released perhaps a little too close to Scour’s rather killer Red EP, Choosing Mental Illness, to its credit, at least has some focus and able-bodied songs, something its predecessor couldn’t lay claim to.

To start, Anselmo’s bark isn’t what it used to be, which is perfectly understandable – there’s no way he’s going to still be the NOLA tough-guy hanging with the Texans. While his repertoire has expanded to include rasps, his voice still borders on hoarse, it seems, which suits these songs — a combination of spiraling punk/thrash — fine. We can poke through opener “Little Fucking Heroes,” the title track and “Individual” as the instant winners, especially the latter, which rolls out an array of odd, swaying riffs, unlike anything else in the man’s career.

The push-and-pull here is that for a lot of older punters, or even those in their ’30s, Anselmo was best served in conventional song settings where the strength of his voice can be put on display. In The Illegals, it always feels like he’s swimming against the tide, trying not to get lost in a sea of time changes, riff switch-ups and hyper-blasts. It’s still a fascinating thought — certified metal legend going at it with extreme metal, but it appears Anselmo has that ground covered in Scour. With the Illegals and Choosing Mental Illness as a Virtue, it is mostly a mixed bag, although when you really peer into this thing, it’s one of the most crazed releases of Anselmo’s career.