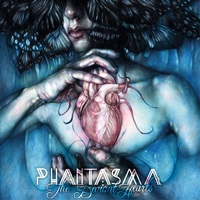 A musical project between a number of symphonic/power metal musicians known around the circuit such as Delain vocalist Charlotte Wessels, Serenity singer Georg Neuhauser and Everon multi-instrumentalist/producer Oliver Phillips, Phantasma is a concept record that functions as a vehicle for the trio to stretch all of their symphonic rock/metal horizons in a 12 track, hour-long format. Charlotte’s debut novella (a fairy tale brought to life) transposes itself over the course of the vivid storyline – with guest vocalists taking on certain male character attributes as necessary.

The varied approach can lean towards the bombastic or semi-Broadway Jim Steinman/Meatloaf proportions on the Georg-led “Crimson Course” and “Novaturient”, the latter working better to these ears because of its slightly power metal transformation after a serene opening. Charlotte develops aspects of her range that glide seamless into Oliver’s orchestration, making the ballad “Runaway Grey” an early favorite while the closer “Let It Die” takes the listener on a magical carpet ride journey, a fitting closer to the story. Evergrey’s Tom Englund contributes his lower range magnificence for the title cut, while Van Canto’s Dennis Schunke adds his tender touch to another ballad “Carry Me Home”.

Going in know that the keyboard and orchestration ratio tips the scales strongly to that favor – so The Deviant Hearts will appeal more to those who live for the theater than conventional, straight ahead metal philosophies. Drummer Jason Gianni adds an explosive fill propensity to the proceedings, making “Enter Landscape” slightly progressive during the bridge while solidly powerful during the verses and chorus work. Not surprising since a couple of musicians in this effort also shine in Trans-Siberian Orchestra, a lot of the musical movements here possess that similar sonic scope if turned into the symphonic metal turnstile. The physical product also contains stunning visual illustrations from Milan-based Marco Mazzoni, giving the words eye-appeal.

Phantasma should gain modest sales because of the proven assembled abilities for talent, so if symphonic rock with small metal twinges floats your boat, The Deviant Hearts could send that muscle aflutter.