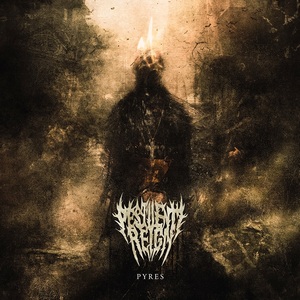 Grooves upon grooves upon grooves. There’s more to it than that, but Germany’s Pestilent Reign are very clearly all about indulging in some mid-tempo goodness. Following up two previous EPs, Pyres is their first full-length album and while one doesn’t have to hear much before thinking of Dying Fetus, there’s also thankfully more to the album than the worship of said groovy death metallers.

To get it out of the way early, there are some very evident Dying Fetus vibes when you hit play on Pyres. To the point where it’s almost distracting the first time you hear it. After the Alex Jones intro that begins “Martyr” you are going to be neckdeep in Fetus-esque grooves. It’s not entirely a bad thing, and Pestilent Reign’s grasp of the art of death metal grooving is quite well done. But then something happens as you continue on in the disc. More and more, you begin to hear another side to the band – one that works equally well with the thundering mid-tempo. The tail-end of “Martyr” begins to dabble more into some melodic structures, and other songs like “Cleanse the Flesh” and “Gutter’s Filth” really flash them off. While it’s nothing really too far into say, a melodeath zone, the melodies help keep Pyres feeling fresh as they bring in the grooves with equal footing. The enjoyable melodies give the otherwise blunt heaviness something to play off of, and help them to feel more destructive when they choose to let the bludgeoning commence.

As a debut, Pyres sets up Pestilent Reign for some continued growth for round two. There’s much to like about their implementation of melodies that never come at the expense of more brutal grooves, and it provides a fertile groundwork from which the band can progress. The grooves may be less inspired, but if they come at them with the same level of inspiration as the melodies next time, they could make a real knockout punch.