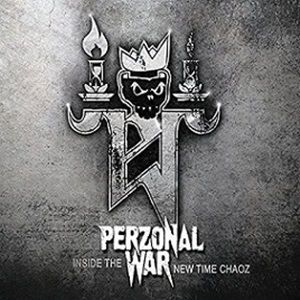 To celebrate their 20th anniversary as a band, Germany’s Perzonal War decide to re-record 11 songs from their first two albums and issue Inside the New Time Chaoz. Considering the relative small numbers who probably took in the original recordings back in the late 90’s and early 2000’s on Gernhart and B-Mind Records respectively, this should be fresh insight into the roots of the outfit, benefitting from modern studio and recording technology advances. It also gives the current rhythm section of bassist Björn Kluth and drummer Andreas Ballnus a chance to add their personal flair to these cuts, joining years beyond the band’s inception.

Straddling an old school power and thrash muscular attack, an obvious propensity for crunchy riffs and gang-oriented choruses becomes apparent on “D.O.P.”, the second song in. The main vocals from guitarist Matthias ‘Metti’ Zimmer owe a debt of gratitude to the sneering James Hetfield of Metallica, who are also one of the solid musical compatriots the band takes a shining to. Comparisons abound to everything from Annihilator to Iced Earth, as well as a pinch of more modern strains a la Machine Head or Trivium in terms of the mid-tempo oriented riffing and harmonic elements they employ. When the drumming chooses to elevate a little more into uppity thrash the galloping guitar nature comes to the forefront, making “New Time Bitch” one of the highlights, even when the band go for more of a doomy transition before returning to a back and forth power/thrash montage (love the use of background vocals for point/counterpoint effect).

The main problem with return engagement for Inside the New Time Chaoz resides in the ho-hum songwriting overall – a case where ability and talent appears in spots, yet Perzonal War is unable to channel it into superior hooks, riffs, or grooves that make the listener scream and shout for more. A sub-par “Area Black” for instance contains the main guitar hook from “Harvester of Sorrow” – only done so much better by the originators, while “Mother Darkness” showcases Andreas ride cymbal proclivity to the point of Dave Lombardo worship ad nausea. The European appeal will remain for the band, while small pockets of underground mavens will take a gander at this record. In the end, best wait for the next Perzonal War studio album. 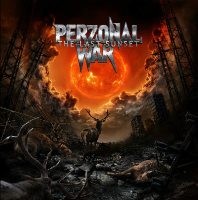