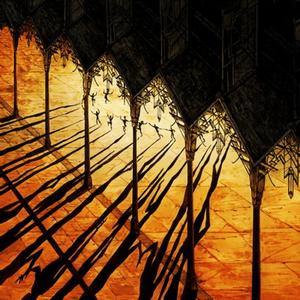 One of the biggest names in the synthwave movement (particularly within the metallic ranks that tend to follow that scene), it’s been five years since the last Perturbator full-length (the critically acclaimed The Uncanny Valley). As one of the innovators of this particular style, it should come as no surprise that mainman James Kent doesn’t want to be limited by his own design, and following the explosion of synthwave acts in recent years, Lustful Sacraments showcases some solid growth and innovation.

While the cinematic vibes and dark atmosphere are still the main course of Perturbator, Lustful Sacraments comes across as more chilly than heavy. Not quite as oppressive in tone, but soaked in a sometimes more gothic and even new wave sort of vibe, much of the album comes across as quite haunting and eerie. “Dethroned Under a Funeral Haze” (sounds like a black metal track, right?) has this beautifully gothic sense of longing to it, all but crushing the listener in its gloom and cyberpunk fusion. “Secret Devotion” has an almost industrial meets Sisters of Mercy vibe to it, with cold, mechanized feelings meshing with dreary rock-ish vibes. Closer “God Says” ends things on the most serene yet chilling, ending in some righteously anguishing vibes. On the other side sonically, “Excess” has that get-up and go mentality to it, capturing that ‘80s-esque vibe and rumbling drive to it like a number of older Perturbator tracks – even if it does end in a more somber and quiet way. “Messalina, Messalina” also ramps up the energy at times, and ends on one of the more oppressive rhythms that are doled out on the album. A bleak and dystopian feel that’s hard to shake.

Perturbator continues to evolve and change, instead of being satisfied with firing away the same old release time and time again. Lustful Sacraments has a moody, eerie cinematic flair that should still entice metallic fans who want their darkness in more sci-fi and horrific ways than just that of shredding guitar. This is all about the atmosphere and mood, and nails it completely.