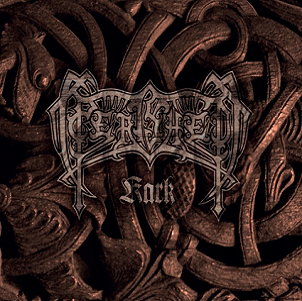 An unsung, if not undiscovered band from the glory days of Norwegian black metal, Perished originally released Kark in 1998 via Solistitium Records, the same label responsible for Behemoth’s early output. Such good company demonstrates the depth of the European BM scene at the time; competition was so fierce that a handful of bands invariably got lost in the shuffle, like Perished. The band would proceed to release the Grim EP in 2000, then bow out with 2003’s Seid. The ATMF label, known for its stranglehold on outsider black metal, has saw fit to re-release Kark with bonus tracks.

To its credit, Kark sounds more advanced than some of the albums from that era. The production may not reach a Dimmu Borgir-like sheen, but the instrumental clarity goes a long way when layered numbers such as “Stier til visdoms krefter” take form, in particular because of its nifty acoustic guitar and keyboard add-ons. The punchy “…og spjuta fauk” works in a spiraling main guitar riff, not terribly dissimilar to Enslaved’s Viking-era work. Proper album closer “Renheten og gjenkomsten” gets the nod as Kark’s most over-the-top number, a veritably blinding number that ends up recalling the formative years of black metal when Bathory was causing a suitable ruckus.

Three bonus cuts sweeten the pot: “A Landscape of Flames,” and the two tracks from the Perished 7” EP, “Kald Som Aldri Før” and “Gjennom Skjærende Lys.” The mining of black metal’s mostly deep catalog is just beginning, it seems, thus, the reissue of Kark should cast a proper light on Perished, who for all intents and purposes, were every bit as capable as the Norwegian acts who were able to break on through to the other side.