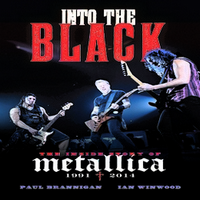 No metal band has more books than Metallica. It’s not even close, actually. The band’s Bay Area days, sacking of Mustaine, rise to dominance, etc. etc., has been told so many times that there’s not much value in going back and telling it again. (Surely someone is trying as we speak.) However, the events post-Black Album are certainly of intrigue when trying to understand how Metallica were able to tip the scales in the 90s and for all intents and purposes, dominate the American metal landscape. British authors Paul Brannigan and Ian Winwood set out to chronicle the events from the last 13 years, and do so quite convincingly on Into the Black: The Inside Story of Metallica 1991 – 2014.

Written in an articulate, vocabulary-enhanced method (read: both gentlemen have a marvelous grasp of the English language), the way in which this era (or “eras”) of Metallica is presented is that of respect, and at times, with a critical eye. The pair take us through the craziness of life after the Black Album, including the ill-fated Guns ‘N’ Roses co-headlining stadium tour (love the bits on how much money Axl Rose was blowing a day), along with the pressures of superstardom, many of which cracked the façade of the band. The Load/Reload era of the band is keenly examined, detailing the band’s loose, carefree approach in the studio, one that saw Hetfield ease up on the reins in all facets. We don’t need to explain the results, obviously.

Well-constructed bits on the Napster case, Jason Newsted’s untimely departure, as well as the sonic calamity that is St. Anger are thoroughly enjoyable, as the Brannigan and Winwood cull from their network of sources to round out the story. (The band did not authorize the book, therefore did not participate in interviews.) In totality, a marvelous read, probably one of the best on the band alongside Mick Wall’s Enter Night tome from a few years ago. Furthermore, Into the Black is the second in a two-part series, with last year’s equally-excellent Birth, School, Metallica, Death having similar weight in the reading department.

Into the Black at De Capo Press