Pathology is a bit of a storied brutal death metal band at this point, being able to crank out an album every year (since 2008) and having a number of member changes within that framework. Notable for having uber-low gurgler Matti Way (Disgorge, among others), this is the second album since his return to the band.

If you crank out one song off of Throne of Reign, chances are you’ll dig it if you enjoy brutal death metal. It’s punishing and there is a wow factor to the immensity of the thick guitars and sick gurgled vocals. The problem results when you try to listen to this album all at once. Each song features about the same format and structure of alternating blasts/slams with some more groove-laden riffs finding their way into the songs once in a while, along with a solo. What makes things worse is how upfront and overpowering the vocals are in the album mix. You’ll come across a decent riff only to have the vocals jump right in front of it and virtually take over. Nothing against Matti Way’s impressive gurgles, but it’s okay to let the rest of the band in there as well. It’s almost impossible to distinguish each track from the next, which is sorely disappointing.

While the band has nicely jettisoned the deathcore elements that plagued their Victory Records days, there’s no excuse for the cut and paste songwriting on display here. Perhaps a break from the yearly album release schedule would give the band enough time to get their bearings and try something new and emerge energized and refreshed. With all of the excellent death metal that has been put out this year, it’s hard to listen to something so one-dimensional and repetitive. Steer clear of this one. 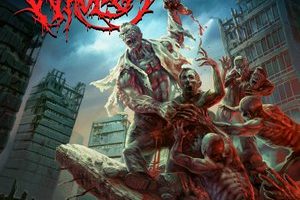