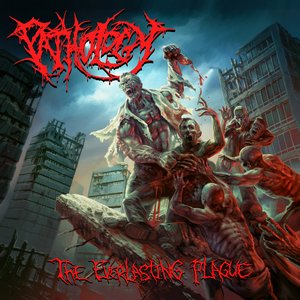 An act that tended to put out some extraordinarily heavy slamming death metal, Pathology’s last album (2019’s fittingly titled Reborn to Kill) was a real breath of fresh air.  Effectively balanced and heavy as hell, it was…dare it be said, a mature brutal death album.  The Everlasting Plague seemingly picks up right where that album left off, delivering a real gut punch of brutality while making it one of the more memorable brutal death albums you’ll hear this year.

An album that’s all about the dynamics, it’s hard to really call Pathology circa 2021 “slam.”  Certainly those parts are an element of their sound, but they are no longer constrained by them.  Melodic, flowing solos (such as in “Engaging in Homicide”) frequently bring the band on an odd but fitting majestic jaunt, even if you are brought back into bludgeoning, mid-tempo territory immediately after.  Music like this should get right to the point after all, no one wants a death metal album that beats around the bush.  Monstrous slams coat “Viciously Defiled,” put they are quick to bring up the tempo naturally and deliver some quasi-technical riffs right around the corner.  “As the Entrails Wither” has a dark and moody opening, and the more grinding pace at times gives it a more majestic feeling to intertwine with its more savage moments.  As with their previous release, the production here nails it.  It’s thick and chunky so that it retains that grimy death metal feeling, but the vocals are never too ‘upfront” (a perpetual slam gripe) and the sound is crisp to augment some of the intricate musicianship is going on.

The Everlasting Plague shows that Pathology continues to be on the top of the game after the act’s member reshuffling a few years back.  It’s a potent album that gives off all of the brutality that one yearns for in a compact dose, and manages to keep song identity high in a field that often suffers from one such issue.