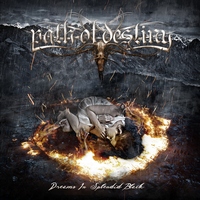 It’s been said before, and will probably pop up again, but the addition of symphonic elements to a black/death formula is always very touch and go. Adding too much bombast can make things border on cheese instead of being epic, and adding too little makes one wonder why it was included at all. German melodic death/black group Path of Destiny took careful time to plot out their second full-length album (six years since their Rise and Fall debut of 2010) but it appears to have paid off with the sound of Dreams of Splendid Black.

The base of their formula does boil itself down to melodic death metal, with some shades of black (some of which stem from the symphonic end) along with light sprinklings of doom (again mostly from the keys). Some songs really let loose on the tempo, with “Two Steps to Eternity” and “Invocation” having some real barnburning moments of thrashy melodies. This is really the band’s forte, with the inclusion of the symphonic elements adding some grandeur to these spots, yet not getting too far into the way of the overall scheme/flow of things. The melodic leads on songs like “The Fire-lit Shadow (The Shadow I Am)” and “I, Ascending from Ashes” are nicely woven in, and act as major highlights. The synth does get its chance to be in the spotlight from time to time as well, with the title track gaining an epic introduction before the riffs take off into thrashy death metal territory. All in all, Dreams of Splendid Black works because the riffs don’t compete with the keyboards, but rather share the same space and give each other the necessary room to be successful.

Comfortably sitting in melodic death/black territory, there’s still much to enjoy about Dreams of Splendid Black. It can be heavy, nuanced, aggressive, and balanced – strong songwriting keeps it standing above water from beginning to end. 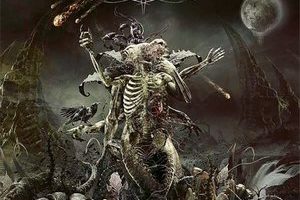