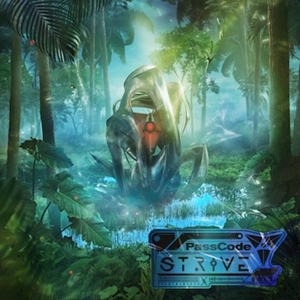 Ten years ago, Blood Stain Child released Epsilon – a unique fusion of melodic death metal, Jpop, and trance. Utilizing heavy riffs, heavily synthesized vocals, and hyper-bouncy beats, it was a remarkable album. But what’s that have to do with PassCode and Strive? It’s one of the first releases since then that happens to hit a similar note, despite this sort of ‘Japanese idol meets metal’ sound blowing up a bit after the introduction of Babymetal.

That said, PassCode has more of a metalcore-esque feel in the riffing, something that pops out in opening track “Spark Ignition” as it fires off a gallant volley of driving riffs and pulsating electronic beats. The heavily processed clean vocals (from multiple vocalists, mind you) may be a turn off for some but it does fit with the futuristic sound of the band, and provides a different contrast to the harsh screams that band also incorporates into their sound. Some tracks lean into different directions, such as the more pop and dance-friendly “Seize Approaching Brand New Era” or the more driving “Starry Sky.” The contrasts can be very striking, such as the switch up from frenetic riffs and electronics to beautiful melodies on “Golden Fire,” and while it is clear the metal rulebook has been tossed out the door long ago, to hear the metallic influences in a different light gives the tracks an intriguing and fresh vibe. Only “yours” really deviates from the band’s kinetic formula, dropping the screams and lowering the vocal processing at points to deliver a song that feels more straight-up Jpop than anything else. It also begs the question of what the band would sound like if they dropped the vocaloid approach on heavier tracks, as the singing on this track is quite pleasant.

Definitely not an album for metal purists, but for those seeking more of a metallic fusion and enjoy acts like Amaranthe, PassCode provides an energetic and thrilling performance. Strive successfully incorporates metallic crunch, pounding synth rhythms, and pop hooks into a satisfying blend that has more lasting power than you might expect. Worth a shot if you want something more left of center for a change.