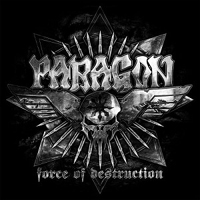 It’s always a treat to review a classic German power metal band like Paragon. The band has been able to hold their own against a bevy of elite power metal bands hailing from their country of origin. If you enjoy Grave Digger, Helloween, and Accept then Paragon should tickle your fancy bone too. Working on their 10th studio album entitled Force of Destruction, the band continues to stick to the tried and true formula established over 20 years ago.

What you get is an album of flawless production, brimming with a glorious sound that harks back to the rough around the edges approach of 80s metal. There’s definitely a feel of vintage power metal coursing throughout the songs, and the gallop of never-ending riffs and catchy choruses will perk you right up. Songs like “Iron Will,” “Tornado” and “Bulletstorm” blaze at high speeds and utilize gang vocals and chugging riffs to give the music some life. It also helps to get an Udo-like performance out of frontman Andreas Babuschkin, proving he can sing with the best of them.

Since their last release, guitarists Wolfgang Tewes and Jan Bertram have been added into the mix, proving the duo can bring forth some technical skills and flair to the band. The pair provides some serious twin-guitar noodling, and they sound like men possessed. The hefty riffs come to the forefront immediately on the song “Gods of Thunder” and the number is quite impressive overall. The riffs get very crunchy on “Dynasty”, but the sweeping refrains help to maximize the sound of the song as a whole. Both tracks are considered to be the strongest on this release, allowing that 80’s appeal to be further cemented here.

The other major contributing factor on Force of Destruction is the talents of producer extraordinaire Piet Sielck. The man has gone on to work with the likes of Gamma Ray, Blind Guardian and Iron Savoir in the past, so he brings ample amounts of experience and daft creative impulses to the recording. He’s certainly instrumental in helping the band forge ahead with a clear definition of what vintage power metal should sound like in this day and age. So you will find this release going from anthem after anthem with catchy choruses and relentless guitar playing to boot.

As a whole, this is a solid release that exhibits a no holds barred approach to vintage metal of this caliber. The music of Paragon will not rise above the genre it aspires to uphold, but it will forever be reliable power metal for fans who enjoy the Teutonic style. Give this a chance if you find 80’s metal still appealing. 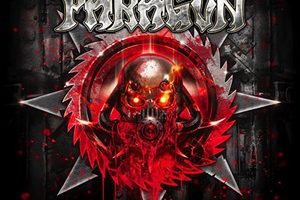