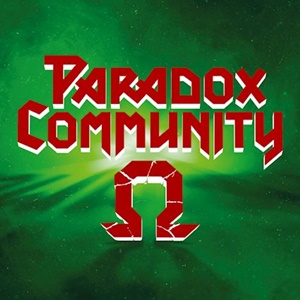 Intertwining a mix of progressive, rock, and metal styles, Paradox Community are a power trio from Germany who have been playing in their current lineup since 2007. Obviously having years of seasoning under their belts, Omega surprisingly is the first official album from the group. You can expect a host of influences from a 1990’s scene, looking into the prism of acts like Pantera, Iron Maiden, Megadeth along with a bit of left field progressive/groove nuances to create a dynamic, intriguing sound over the course of ten songs in an hour.

There are specific instances where the Maiden/Megadeth-like musicianship and intricate interplay shows up in instrumental sections of the title track as well as the softer to louder action throughout “Desire 2” – yet it never supersedes the main catchy vocal melodies and main musical components on hand. In a trio format, all hands on deck play an important role – bassist Henk Humberg acting as the conduit between the driving percussion work of Thomas Plum and beefing up the rhythms and groove for vocalist/guitarist Mirko Mucha. The decelerating transitions within “Burning” for instance are perfect placeholders for the next energetic burst of music put forth – Thomas using some nifty groove maneuvers against his normal propulsive snare/double kick work. The eight-minute plus epic “Silent Sadness” opens with some beautiful acoustic instrumentation as Mirko’s contemplative, calm delivery matches the proceedings – eventually carrying into an electric-fueled metal monster with higher register vocals and solid power/thrash mechanics. Choosing to keep cleaner tones and a clearer, even production allows Paradox Community to convey that occasional Prong/Pantera-like aggression but in more of a 90’s groove/thrash context, while also showcasing their progressive prowess and proper songwriting skills.

Occasionally missing the mark a bit with some rap-like/ shouting moments towards the conclusion of “White Chapel” or “No Respect”, Omega has a lot more going towards the good through its fusion of progressive, thrash, and groove metal influences mostly from the early to mid-1990’s period of the genre. A band to keep tabs on for sure.