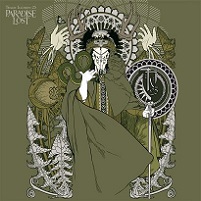 Nigh time the mighty Paradise Lost digs through their vaults for some b-side and leftover action. They’re no Katatonia in this regard (who have perhaps, the deepest leftover log of songs in metal), but the Brits have piled them up over the years, making the release of Tragic Illusions 25 (The Rarities) a bit of a necessity. All sorts of rarities, covers, and reworked numbers are to be found, plus, who wouldn’t want to have a gander at in-the-now versions of seminal numbers like “Gothic” and “Our Saviour?”

The 14 numbers that comprise Tragic Illusions are relatively new, with the latest going back to 2007, so don’t think there’s going to be a gaggle of odds and sods from Icon and Draconian Times. (Those can be found on the 2012 reissued edition of those albums.) Rather, PL has included one new song (“Loneliness Remains”) to lively up the running order, and spiced in alternate, orchestral versions of “Faith Divides Us, Death Unites Us,” and “Last Regret.” Both are tonally, a bit more reflective in this setting, so the orchestra idea works, while the cover of Everything But the Girl’s “Missing,” does not.

The top finds here are the updated versions of the aforementioned “Gothic” and “Our Saviour,” both of which represent the band’s dark/death Goth days. “Gothic” especially has some turnaround flair, with those Mackintosh melodies falling further into the abyss, while a discernible Nick Holmes casts his identifiable sing-roar. And while these are great, it’s the song-oriented and melodic swivel of “Ending Through Changes,” “Back on Disaster” and the excellent “Silent Heart” that make this rarities collection something to reach for.