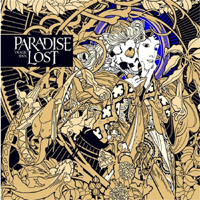 When chief Paradise Lost songwriter/guitarist Gregor Mackintosh started to reveal via the press that Tragic Idol had elements of Icon and Draconian Times, it was instant salvation for some…including Blistering. Since the Brits have recaptured their metal spirit of yore last decade, their output has solid, if not mildly spectacular. They’ve yet to produce a real world-beater, although Tragic Idol and its bleak, melody-laden façade certainly comes close.

For starters, the album doesn’t have the lean and pristine angle of the above-mentioned mid-90’s pair. Rather, Tragic Idol has the same murky riff slot that 2009’s Faith Divides Us…Faith Unites Us did, and it runs congruent with Nick Holmes’ hearty sing-belch. Holmes still is able to hit melodic paydirt with his vocals though, just check out the swooning chorus of opener “Solitary One,” the restrained verse of “Fear of Impending Hell,” and title track, all three of which unite the band’s glory days and early 90’s output.

Mackintosh and fellow guitarist Aaron Aedy certainly don’t lack for any guitar crunch, with mounds of it digging in on album highlight “Crucify,” which could be the band’s heaviest song in its illustrious history. Elsewhere, Mackintosh and his spiraling leads come to the fore on the excellent “In This We Dwell,” a song that volleys from ethereal leads to a steady gallop, held down nicely by new drummer Adrian Erlandsson (ex-At the Gates, Cradle of Filth).

The argument exists that these are the kind of albums PL would have made had they not have abandoned metal altogether from 1997 to 2002, but Tragic Idolhas way too many shards from the band’s Gothic and Shades of God past for that to be a realization. In any event, Paradise Lost hasn’t functioned at such a high level in nearly two decades. May they continue to doom on.