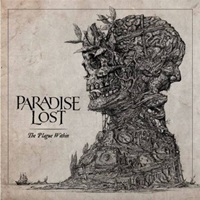 Pioneering the death/doom movement in the early 1990’s through pinnacle releases like Lost Paradise and Gothic, Paradise Lost has never been content to stagnant throughout their career. Shifting tides occurred regardless of prevalent trends, an admirable trait despite reaching commercial peaks through personal favorite Draconian Times and subsequent exploration of alternative elements that created schisms in the fan base by 2001’s Believe in Nothing. Their past few releases have pushed more of their metallic roots, and as a result their fourteenth studio record may be their closest to resurrecting their early days in the appropriately titled The Plague Within.

Vocalist Nick Holmes teeters between his clean gothic and deeper death deliveries – often employing both to chilling effect on winners like “An Eternity of Lies” and the darker yet driving “Victims of the Past” (the latter made all the more heavy through drummer Adrian Erlandsson’s triumphant fills). Guitarists Gregor Mackintosh and Aaron Aedy seek out the perfect doom chords and construct perfect, logical transitions around them – out Sabbath-ing and Candlemass-ing through the majestic unfolding that is “Punishment Through Time”. Measured notes and drum hits punctuate the 6 minute plus “Beneath Broken Earth”, possibly the greatest track the band has written/ performed in a good two decades as Holmes’ affect during the verses makes you feel like the world is opening up below crumbling dirt – while “Flesh From Bone” contains some thrash spirit at times to contrast against the normal doom gloom proceedings.

As we gain more comfort in who we are and where we’ve come, ideally we confidently stride from a place of head, heart, and soul – knowing that in the end, the trueness can stand for itself. Paradise Lost doesn’t have to prove anything to anyone but themselves at this point – so as such, The Plague Within illustrates a quintet that still have plenty left in their doom/death tank creatively to say convincingly. Another veteran act surprises in their later stages of life – proof that not all metal’s best works need be developed in youthful exuberance.