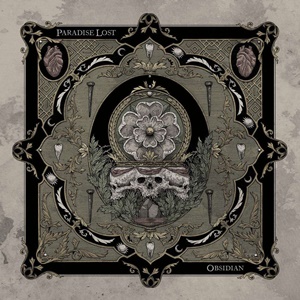 A premiere act who have traversed multiple subgenres of metal to varying degrees of success, Paradise Lost have had periods of strong doom/death, gothic, and electronic/alternative-oriented output depending on where you look at their career. Affinity for certain periods depends on the person – for this scribe Icon, Draconian Times, and the controversial One Second highlights during the mid to late 1990’s – but they’ve been back on a stronger, more fruitful track for many older fans since the past decade. Obsidian is the group’s 16th studio record and considering four-fifths of the members are still around from their beginnings stands as a testament to the belief and commitment the musicians have to their craft. What should we expect, then?

At this point in the Paradise Lost career, it seems like as songwriters and players the band wish to execute a mixture of doom-infused gothic songs with the occasional foray into their death tendencies. The earworms and hooks can be very circular and hypnotic – specific phrases and guitar mechanics revolving in that mid-tempo allure of catchiness and comfort, as “Forsaken” and “Fall From Grace” deliver, although the latter sits a bit more in a slower, lumbering despair as Nick Holmes switches up his semi-growl and clean, lower registers. The rhythm section provides some burst of energy and pulsating interplay on a cut like “Ghosts” where you can truly feel some uplift and excitement, bassist Stephen Edmondson and drummer Waltteri Väyrynen solid with instinctual feel for the needs of the song. Throughout Gregor Mackintosh as a guitarist and keyboardist knows when to put the right accent with his instrumental textures – building things up, breaking them down, and providing edge of seat action for the clean to electric transitions during second half highlight “Ending Days”, while “Ravenghast” haunts the ears as a closer, the brief piano introduction against crushing doom riffs and Nick’s measured growls a treat, a bone-chilling finale that could be one of Paradise Lost’s best ending songs to date.

Keeping the playback to a tight nine-song, 45-minute window allows for proper absorption without exhaustion. Obsidian showcases the band unified in a mission to go where they want, embodying their metal instincts and logically following up Medusa which should be appreciated by most of the band’s legions and generations of fans.