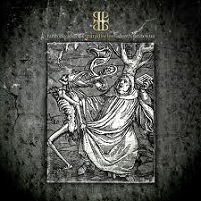 Even during their very-experimental late 90’s/early 00’s period, Paradise Lost never totally lost their plot. Sure, 1997’s One Second and its follow-up,Host irked more than a few, especially those who cut their teeth on the seminal Gothic and to-die-for Icon and Draconian Times albums, but the songwriting tandem of Holmes and Mackintosh always delivered, even when metal was the furthest thing from their minds. Now that metal is back in the fore, man, Paradise Lost look poised to re-take the world they once owned in the mid-90’s.

Faith Divides Us, Death Unites Us follows in the same vein as 2007’s In Requeim, meaning there are loads of molten guitars, sullen soundscapes and Nick Holmes’ perfected sing

/growl. Here, lots of parallels can be drawn to theShades of God album, especially with Holmes’ delivery during numbers like “The Rise of Denial” and “Fraility.”

A few surprises abound, namely the brutal “Living With Scars,” which might be the heaviest thing the band has done since…ever. Opener “As Horizons End” is the type of brooding cut that would have fit right at home on Gothic, while the title track echoes the glorious melodic avenues taken during the band’sDraconian Times era.

Paradise Lost precariously stays away from getting too melodic, which could either hurt or help this album, depending on which fraction of the band’s fanbase you ask. Yet, this is very dark, very cloudy album, possibly moreso than My Dying Bride’s The Lies I Sire. Amazing…ten years ago PL couldn’t be bothered with this stuff. That’s probably why it’s not a reach to say no one does British doom better.