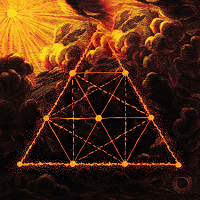 Hovering around the line where raw becomes a bit too raw (i.e. like it was recorded in a shoebox), Pantheon of Blood’s second EP Tetrasomia is a traditional black metal offering with all parts in the Scandinavian BM camp. There’s no shortage of mid-90’s vamping or riff blends; it’s clearly a dedicated and painted stab at recreating that time and place, with little (or no) eye toward the future. Works for some bands; not so much for others. Works for Pantheon of Blood.

Figuring that forcing the listener to wade through the mud and soot of riffs that tunnel-vision in their approach and takeoff, Pantheon of Blood does embed melody in the undercurrent. They’re present, but you need to find and hang on to them, like with opener “Thunder Alchemy,” which develops much like Emperor circa In the Nightside Eclipse, just without keyboards. The number of choice here would be “Stigma ja Kolmikari,” where the band trucks in some elongated guitar lines, something out of the book of Pagan black metal, if you will. Still, it’s totally necro. All four songs are, of course, so funnel Pantheon of Blood through the same true, cult, corpse-painted filter as the rest of them.

Pantheon of Blood on Bandcamp