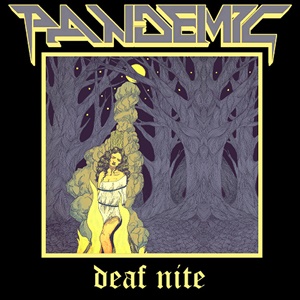 Another discovery through social media (YouTube this time), Polish thrash band Pandemic started in 2015 and have released their debut four-song EP with Deaf Nite. It’s always intriguing to hear newer bands in thrash outside the Scandinavian and western European blocks – just to experience their take on the scene and see if they are willing to incorporate something unique or different to the mix. After numerous passes, it’s apparent that this quartet appreciate some traditional and progressive influences into their propulsive brand of old school thrash.

The band use jumpy melodic runs which contain serious musical chops and variant tempo molds that recall bands like Angel Witch and Satan just as much as say Megadeth and Forbidden. The heavy to quiet contrast for the title track showcases a wider array of influences, keeping your ears pinned for the next heads down barnburner “Total Battery”. Sadistic raspy vocals in the Sodom/ Cyclone mold make this specific track captivating – you could almost set your time machine back to 1985-1987 as the guitars blaze and the snare/kick action roars from your speakers. Pandemic is an act where the bass play often becomes the third lead element – Steve Harris and Steve DiGiorgio probably a factor in the fluid technical prowess from Gniewko Mara Jelski throughout opener “Pandemic” and the six-minute plus dynamic closer “Warpath” where some NWOBHM harmony combinations abound. While the band certainly can ramp up the speed at will, what keeps Deaf Nite intriguing is those left field curveballs that they throw at the listener – be it a funky bass line, stunted gang choruses or some killer melodic lead break/ instrumental sequence that you can hum along and retain.

The cartoon-like cover art probably sends a different stylistic message than intended (wouldn’t you think power or folk metal here?), but when you look at the music, it’s hard not to appreciate Pandemic for moving into some solid NWOBHM-fueled speed/thrash here. Definitely looking forward to the next release, as four songs sets the stage for some fiery follow-up salvos.