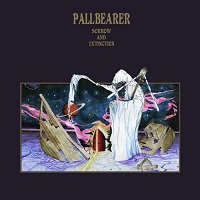 Fitting that a band with the Pallbearer moniker would create such murky and doomy death marches. Hailing from Arkansas, Pallbearer plays a brand of doom that is totally behind the beat, but hardly lazy, with an emphasis on sobbing melodies and those slow, turgid riffs that are ripped right out of the Sabbath textbook

. On their Sorrow and Extinction debut, Pallbearer arrive rather quickly as one of American doom’s best newcomers.

At only five songs

(which leads one to draw a quick parallel to 40 Watt Sun’sThe Inside Room), Sorrow and Extinction gives itself plenty of room to breathe. The guitar tandem of Devin Holt and Brett Campbell hook up on more than a few occasions for some melodic interplay, a happening that makes album opener “Foreigner” a sure-fire winner. The band takes the pre-requisite amounts of dips in the Southern-bred riff pool on “Devoid of Redemption

,” while latching onto some mournful melodies on the excellent “The Legend.”

Perhaps the X-factor in all of this is Campbell, who also handles lead vocals. His voice is cut the from the same spot-on-pitch cloth that 40 Watt Sun’s Patrick Walker, Apostle of Solitude’s Chuck Brown, and Solitude Aeturnus/Candlemass’s Robert Lowe, meaning his notes are able to take flight even when the music sinks as low as it can possibly go. Campbell proves his usefulness throughout the album’s five cuts, striking the doom toll on “Foreigner” and “An Offering of Grief,” where his cries are utterly striking.

The personification of everything that is right about sorrowful American doom metal, Pallbearer are able to take the vast landscape of doom metal and downsize it to the point of rapid accessibility. On Sorrow and Extinction they leave little to chance, offering up what should be one of the year’s more oppressive and bleak doom offerings. Well done.