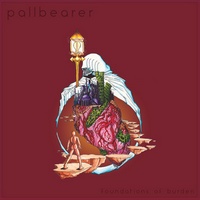 Two years later and the Arkansas doom phenom Pallbearer returns to crush the world with its murky and misery-laden forays into the abyss. One of the biggest stars of 2012 Sorrow And Extinction was a monster of an album and admittedly, one I personally came into late. Not a mistake to be repeated Foundations of Burden has been awaited with, among many albums this year, with enormous expectations. To all those concerned not only does it meet those lofty expectations, it kinda fucking crushes them completely.

For those familiar the template that lived on Sorrow And Extinction is alive and well here, though given the occasional jolt of energy. Not speed, mind you, as all of the songs here (…all six of them) still lurch and roll from sorrowful valley to sorrowful valley, still helmed by the fantastic vocals of guitarist/frontman Brett Campbell above more upfront melodic leadwork as shown in opener “Worlds Apart” or mid-album staple “Watcher In The Dark”, the latter of which also features a fantastic set of solos after the halfway point. Despite falling in the same vein of the work of the first album, the music here is bigger, richer, more textured and, surprisingly enough, carries a good deal emotional heft. The same classicisms as ever remain but a standard doom release this certainly is not.

With the enormous build up and post-release positive press the band is receiving for Foundations Of Burden in mainstream publications, the bigger curiosity will be how the album is seen contextually in the future. To leave here simply as a fantastic album would really be selling it short as, likely holding the power to be one of the cornerstones not only of the year, but also of the genre, though whether or not it’ll carry the same divisiveness of Sunbather seems doubtful, given the difference in genres. The out-of-scene speculation aside, Foundations Of Burden is a stellar way to spend an hour whether you’re feeling miserable or just looking to be taken on a riveting journey.