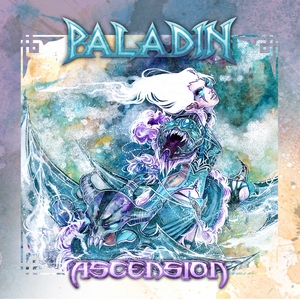 Initially catching wind of Paladin back in early 2017 with their two song demo on Bandcamp, it was clear then that the band was going to generate some buzz. Their high-energy combination of strong thrash, power, and melodeath elements made for a potent listen, and their full-length debut Ascension delivers on all of the promise the band had to offer and takes things further.

Much of Ascension revolves around generating some frenetic riffing and combining it with triumphant choruses and plenty of shredding solowork. The type of thing that will make you want to jump right into headbanging with a smile on your face (whether you want it there or not). While some tracks lean towards more power or thrash, there’s always a decent amount of mash-up, and one of the strongest assets the band has is their heaviness. Those who avoid power metal due the lack of aggression will find no faults in the melodeath influences the band brings into make it all sound heavier. Tracks like “Bury the Light” and “Divine Providence” exemplify this vibe – going so far as to toss in some heavier, raspy vocals to compliment the clean power/thrash ones that are the dominating force. Outside of heaviness, in case it wasn’t already clear at this point, is the band’s shredding musicianship. There’s simply oodles of solos and furious leads to consume from start to finish, sometimes piling right on top of each other in heroic fashion. But it’s not just to showboat, they enhance the songs and give them some additional adrenaline and direction – they match the anthemic tone of the music and simply provide some added gusto. Combining it all together makes for a very addictive and fun listen.

Ascension successfully merges the epic feelings of power metal, the adrenaline surge of thrash, and adds another injection of heaviness with occasional melodeath leanings. A deadly and wildly entertaining ride that should provide melodic metal fans with plenty of cheer (and a sore neck).