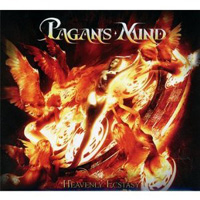 Long one of power/progressive metal’s best-kept secrets, Pagan’s Mind should be able to ditch such a tag now that they’re hooked up with SPV. Of course, being on SPV today is a lot different than it was five years ago (read: Manowar and Blackmore’s Night nearly sucked the German-based label dry), but for a well-respected band like Pagan’s Mind, it’s a crucial move to prolonging a career that not many know about.

The follow-up to 2007’s God Equation, Heavenly Ecstasy sees the Norwegians continue to brandish an up-tempo, airy type of progressive power metal.Singer Nils K Rue has one of the more distinguishable yelps in this forum, and the man can pull a syrupy chorus out of his ass like no other – just check out opener “Eyes of Fire.” The nimble “Intermission” and rocked-up “Walk Away In Silence” also show Rue busting out some hearty vocal melodies, including some Geoff Tate-like highs in the latter.

Not a whole lot of shred here, as Pagan’s Mind get grueling on “Into the Aftermath,” and proggy on the keyboard-led “Follow Your Way.” Some may find fault with the band’s hyper compositions, as there’s the usual display of Euro prog metal energy (and occasional brush with cheesiness on “Live Your Life Like A Dream”) that tends to rub people the wrong way, yet one has to think Pagan’s Mind are in the right place.

Rue is truly the focal point here, and if his frenetic vocals don’t sit, then Pagan’s Mind becomes a tough sell with Heavenly Ecstasy. However, Blistering would like to perish the thought and continue to place the band in the upper echelons of bands in the power/progressive metal field worth giving a damn about.