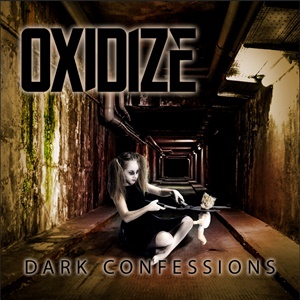 Starting in 2017 with the goal of putting together a band with musicians of similar tastes, Oxidize develop a melodic metal sound with traditional and power roots on their debut album Dark Confessions. These Swedes have ties to bands like Manimal, Hardcore Superstar, and Crystal Eyes to name a few – so it’s not like the five-piece are charting unfamiliar ground in terms of their style, songwriting, and performances. What most people want in this platform are a solid set of songs that are catchy, reasonably quick to grasp, and contain the right mix of skillful interplay and hooks, harmonies, and melodies that make people move. And that’s a pretty accurate description as to what you can expect here.

When wishing to throw down some double kick mechanics and free flow fill work, drummer Mika Vainio delves into that power arena against his conventional groove duties for “Coma”, an entertaining Firewind-ish number with a strong chorus and a quick arpeggio-laden lead break all in the span of under three-minutes. Content to also unleash some more commercial, melodic hard rock riffs and uplifting melodies on the follow-up “Not an Angel”, you hear the addictive, smooth vocal harmonies plus upper register nuanced delivery of singer Anton Darusso, very gifted and adept at crossing both lines smoothly from metal to hard rock and back. When wanting to be a little heavier and faster, you’ll get a mix of Symphony X meets Nevermore fury for “Revolution”, the riffing containing lots of those Jeff Loomis-like measures while the rhythm section shifts between bursts of speed and progressive mid-tempo transitions that are earworms for the listeners. Oxidize smartly mix up their approach from power to anthem templates – keeping interest on high even with back half songs like “Titanic” and Accept-like closer “Crucify Me”. Sadly to say, bassist Tommy Larsson passed away before this album release – and the rest of the band dedicates this record in his honor.

Dark Confessions doesn’t feel like a debut album, especially considering the delivery, execution, and catchy, versatile approach these twelve songs capture. Oxidize have found solid footing out of the gate, and for those into melodic metal with hard rock and power traits, this is well worth investing some time and energy absorbing.