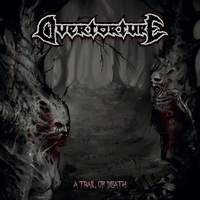 Filling that niche of crushing, timeless death metal without the need to ‘go full retro,’ Overtorture’s sophomore effort, A Trail of Death has a refreshing lack of “easy categorization.” Better to leave this one as pure death metal and get on with the splattering than to ho-hum around trying to dissect the details.

You many recall that Overtorture’s main claim to promo-sticker fame is that having Magnus Martinsson (ex-Grave) on lead guitar. You can be thankful that there’s not a bunch of Grave-worship (and thus Entombed/Dismember comparisons), as A Trail of Death avoids the easy buzzsaw guitar trap and heads its violence straight for the throat. Here you’ll find vicious riffs that sound as if they are from across the pond (which means Floridian by the way) as often as they sound European (with tasteful melodies that don’t compromise brutality) – yet never bothering to ape either of them. Some tracks offer a more mid-tempo forward assault, such as the stomping of “Razor Twilight” and slick groove of “Primitive Impulse.” Others prefer a speedier approach (yet offering some breaks in speed to aid in digestion), such as “Mirrorkin” and “Deep Dark Darkess.” Standout “Maggots in Her Heart” (how romantic) effectively breaches both scenarios, going from crushing death metal riffs (complete with some interwoven melodies) to slower grooves that have some Obituary-esque vibes.

Nothing here is going to turn the scene upside-down, but there’s always room for some well-done death metal that doesn’t feel the need to cater to current trends. Fans of pure, unadulterated death metal should gobble this one up.