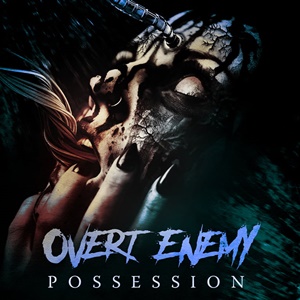 Doubling up as the best Slayer tribute band in North America, it’s probably obvious where Texas’ Overt Enemy land on the genre spectrum for their latest EP Possession. Active for six years, they released their first EP Inception in 2018, content to pump out product of a quick-hitting variety in a shorter format. Makes sense given the attention spans of most consumers these days, and as such if you execute the material adequately it should leave patrons clamoring for more. After numerous spins, the four original songs + cover track prove Overt Enemy understand the thrash landscape, injecting their songwriting with a bit of punch and modern angst to separate themselves a bit from the ‘old school’ pack.

Haunting keyboards add tension in a horror-like/cinematic scope for standout “In the End We Died” – allowing the melodic guitar/shred activities to elevate the energy, the building chorus intensifying throughout the track. Guitarist Leo Ortiz could certainly be Tom Araya’s replacement in Slayer giving his acidic, demonic-laden grit and screams – penetrating the landscape right away on the title cut. His axe duties along with second guitarist Rob Hahn showcase a penetrating, dual heaviness that can be as brutal as it is musically sharp – their interplay and shifting nature keeping “Pray for Death” top of mind as well. The band sometimes add tremolo-picking aspects or a slower groove to progressive tempo mold to distinguish themselves from just being a one-trick faster bash and dash entity – and that’s a good thing as that could help them gain multiple followers from the new guard beyond the old. The EP closes with a Slayer cover, their choice reaching back into the Hell Awaits era with “At Dawn They Sleep” – a classic that to these ears bridged the gap between some of their traditional influences and the ensuing Big Four transformation we know and love from Reign in Blood forward.

Five songs in under twenty-four minutes, Possession promotes thrash in a passionate manner – and should satiate even the most skeptical metalheads.