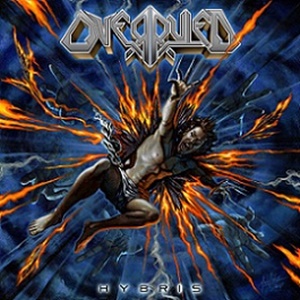 Founded in 2012 and steady within the lineup ranks since 2015, Dutch quartet Overruled live for a speedy/melodic thrash combination on their first full-length Hybris. It’s not easy these days to differentiate yourself with decades of music history at your disposal – so at this point it’s more about passion and belief in your style, and let the execution and musicianship speak for themselves. Which is evident as you take in these nine tracks – it’s the little things that matter to this band, nuances that many others in the game take for granted.

Take for example the Iron Maiden/Thin Lizzy twin guitar refrain that reverberates through “Follow His Order” – transforming from a steady double bass thrash arrangement in its inception to a bass-fueled instrumental transition break when Remco Smit and Ronald Reinders showcase licks and tricks of the trade that prove they can play circles around their contemporaries. Those types of maneuvers separate the band from the pack- as many of the parts for “Pawns of War” and “Lust for Power” do bare resemblance to those early thrash years when Metallica and their contemporaries were fusing together NWOBHM harmonies and melodies against the speed and aggression of faster bands like Motörhead and punk. Expect lots of stop/start and building mechanics when it comes to the Overruled approach – Remco doubling on vocals with a gritty sneer matching the speed and intensity, gang vocals supplementing key verse/chorus passages. The one-minute “Purgatory” as track five provides that ambient breather, featuring acoustic action and a narrative element to prepare you for the final onslaught of electricity. You can imagine a boatload of shout-a-long and slamming audience interactivity to many of these tracks – the riffs magnetic, the tempos swinging, and it’s hard not to think of Metallica, Rage, and Annihilator careening headlong into an addictive swarm of sonic oblivion.

Beyond the fact that the cool logo and attention-grabbing cover art (thankfully no skulls appear here), Overruled keep the rhythm train rolling on Hybris. It’s old school approach without compromise will win over followers easily, and should separate them from those Exodus/Testament-ish younger bands in the process.