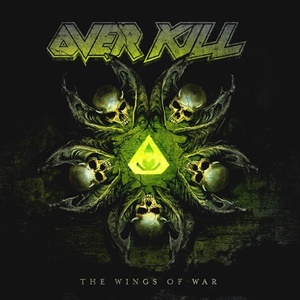 Mainstays Overkill have survived the trials and tribulations that come with decades in the scene better than most. When many abandoned the thrash flag for warmer, alternative pastures – they kept trudging along, even if the audiences went from thousands to hundreds per show. Now that the underground ship has been righted, they benefit from renewed interest not only from the old 80’s guard, but their offspring – clearly galvanizing the troops through a solid 2010’s run that started with Ironbound and continues with this year’s The Wings of War. The quintet may have a new drummer on the throne (welcome Jason Bittner – he of Shadows Fall and Flotsam and Jetsam notoriety) yet remain steady on their three-dimensional songwriting output where punk, street level rock and roll, and metal collide into the energetic combustion that is quintessential Overkill.

As the warning instrumental signal opens the first segment of “Last Man Standing” (a probable set opener to support this album), it’s evident that the rhythm slam and crunchy, heads down riffing set up Blitz with the proper word volley and octane helium vocalization necessary to rally those troops around the thrash cause. Over the course of these ten tracks, the quintet excels at delivering versatility – understanding the need to mix up the up-tempo speed and attack efforts such as “Bat Sh*t Crazy” with moodier, groove-laden affairs such as “Distortion” and “Where Few Dare to Walk” (the opening riffs for the latter baring passing thoughts to “Wherever I May Roam”). Paying homage to their home state New Jersey and all its unique sights, sounds, and people for the punk-ish “Welcome to the Garden State”, it’s great to hear Blitz’s witty sarcasm and tip of the cap to Bruce Springsteen during the closing unison background vocal chant tie this standout together. There’s an inner confidence to where Overkill tread musically at this stage in their career – if Blitz wants to scream his balls off for the ending of “Head of a Pin”, he does – if the band wants to get a little more progressive in terms of the guitar and bass to drumming action, they will on “Out On the Road-Kill” – and it works.

This time seeking out the mixing/mastering skills of ‘Zeus’ Harris, it’s a punchy record that tries as best as possible to be clear while conveying much of what you can expect when Overkill hits the road live. The Wings of War keeps the green and black machine moving along just fine – with no signs of retirement lingering anytime soon.