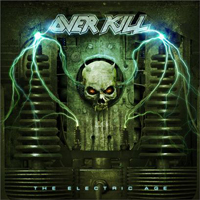 Listening to Bobby Blitz on The Electric Age…feels like a sniping dog coming at you. And it’s not like Overkill hasn’t been nipping at everyone’s heels the last few decades, it just feels like they’re much closer, smellier (surely the Jersey dudes wear cologne, right?), and frankly, meaner. Well, age hasn’t made them leaner, that’s for sure, but who is to argue with the frenetic, age-defying thrash that is the band’s remarkable 16th album? The Electric Age is every bit as tout as its predecessor, 2010’s Ironbound, and just as nasty…like a junkyard dog.

As opposed to the turnstile thrash approach of Slayer, Overkill’s songs tend to stretch beyond the five-minute mark, allowing Blitz and the boys plenty of time to pile on those spiky and punky riffs. It’s not like anything Overkill is doing is inventive or head-turning; they just fine their comfort chord progression and tremolo picking base, and go at it, like on opener “Come And Get It,” and the hyper “Electric Rattlesnake.” (Actually, Blitz’s vocals go above a notch on the hyper level…they’re basically helium-induced in the chorus.)

Gang vocals head down the aisle on the excellent “Black Daze,” which is perhaps the most recognizable throwback to the Horroscope days, while the brazen “Wish You Were Dead,” “Drop the Hammer Down,” and fun “All Over But the Shouting” are the ideal platform for Blitz’s weathered, yet no-less snarky lyrics. The man has long been a divisive force for Overkill, but there’s no denying he has one of the more imitable yelps in all of thrash. You can hear the thing from a mile away practically.

We’re at the stage now where all the of old thrash acts are trying to outdo each other rather than trying to out-think each other. And as most of us relatively intelligent people know, there’s no thinking in thrash. With The Electric Age, it’s probably best to pack your helmet, put your head down, and take the dive…Overkill will do the rest of the wrecking. The Electric Age is mean, lean, and like their trademark font, green. (PS: Overkill bassist DD Verni was a second cousin of my high school English teacher Mrs. Verni. Gnarly!)